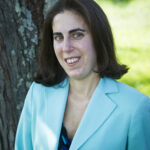 Cantor Laura Breznick joined the North Shore Synagogue family in July 2022.  Growing up in northern New Jersey, she was very active in NFTY, spending five summers as a camper and two years on staff at URJ Camp Harlam. Upon her graduation from high school, Cantor Breznick continued her education at the Hartt School of Music and the Greenberg Center for Judaic Studies at the University of Hartford, where she received her Bachelor of Music degree in Vocal Performance with a minor in Judaic Studies.

Before entering cantorial school at Hebrew Union College-Jewish Institute of Religion, Cantor  Breznick was very active in the New York City choral scene as a member of the Dessoff Choirs, with performances ranging from Beethoven’s Symphony No. 9 in D Minor at Lincoln Center to singing backup for the Kinks’ Ray Davies at Town Hall, and on The Late Show with David Letterman.

During her first year of cantorial studies in Jerusalem, Cantor Breznick had the privilege of traveling to Belarus as part of the FSU Passover Project where she co-led four seders in two days and performed as a soloist at the International Jewish Music Festival in Minsk. She also was involved as a volunteer for KEEP, an English tutoring program in Jerusalem that seeks to help underprivileged Israeli and Palestinian children.

Upon her return to the United States, Cantor Breznick served as student cantor at Temple Emanuel in Roanoke, VA; Temple Beth Shalom in Arnold, MD; and Temple Beth-El in Jersey City, NJ. In addition to her student congregational work, she also completed one unit of Clinical Pastoral Education at NYU Langone Medical Center as a chaplain intern, working with patients in the women’s surgical and pediatric units.

During her Cantorial studies in NYC, Cantor Breznick was awarded both the Cleveland Cantors Prize and the Baltimore Associates Scholarship.

Cantor Breznick was ordained from the Debbie Friedman School of Sacred Music at the Hebrew Union College-Jewish Institute of Religion in May 2016. Her thesis focused on providing colleagues with best practices for working with students of different abilities in an inclusive fashion in congregational life. For her ordination recital, Cantor Breznick focused on Jewish texts of inclusion.

Cantor Breznick completed her training in Clinical Pastoral Education as a full-time chaplain resident at Bridgeport Hospital. In addition, Cantor Breznick served as a virtual Hebrew tutor for the Community Synagogue of Rye in Rye, NY.

In October 2018, Cantor Breznick served as the Jewish voice for a panel entitled “Welcoming the Stranger.” The panel, sponsored by the Interfaith Women’s Initiative, brought together female leaders of the three monotheistic faiths to discuss and debate the universal importance of welcoming the stranger in our midst. The panel was broadcast nationwide in December 2018 on the Jewish Broadcasting Service.  You can click here to watch the panel.

In April 2019, Cantor Breznick was honored to lead the women of Temple Sholom in their first ever Women’s Seder. You can read all about the seder here.

In November 2019, Cantor Breznick was guest artist for a concert entitled, “A Cantorial Celebration,” where she performed on the bima of the Emanuel Synagogue in West Hartford, CT with colleagues from around the world. The concert was attended by over 600 people and written up in the Connecticut Jewish Ledger. You can read the write up here.

Cantor Breznick also serves on faculty at URJ Crane Lake Camp most summers, helping to bring her love of Jewish learning and music to Jewish youth from across the region.

When Cantor Breznick is not on the pulpit you will find her curled up with a good book, spending quality time with family and friends, and enjoying Thai food.

Our Clergy and Staff >>